An unique composition, based on a 100-year-old Estonian family recipe, to support your immune and defense system in a delightful way. Try it yourself! 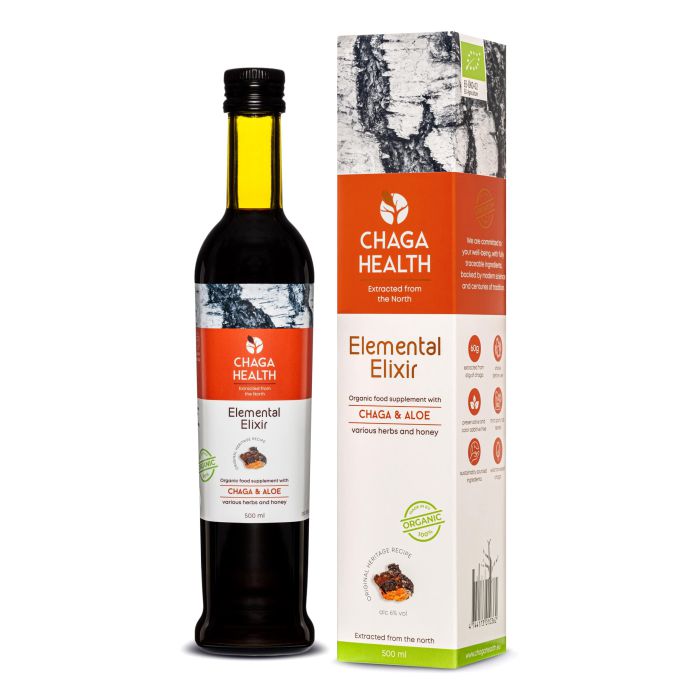 The foundation for this Elemental Elixir Chaga & Aloe was created based on a 100-year-old family recipe from the Estonian family of Siim Kabrits (founder Chaga Health).

The family recipe was too valuable not to share with the whole world so that is exactly what happened!

Chaga has been used for over 600 years in Asia, Russia, Estonia and Siberia for its potential health-promoting properties. Traditionally, a strong tea was drawn from Chaga mushrooms and simmered on the stove for hours before a dark, almost black liquid remained that was used as an antiseptic and anti-inflammatory.

Aloe arborescensis is Aloe vera's even more powerful big brother. Aloe is attributed with anti-inflammatory properties due to its ability to activate the immune system.

These anti-inflammatory constituents of Aloe are: aloe-emodin, aloenin, barbaloin, beta-sitosterol. Aloe arborescens is the more exotic ingredient in this elixir.

Estonian families grew Aloe indoors since 1900 and used its beneficial juice for a host of ailments. Estonia is too cold to grow Aloe on a larger scale, so the Aloe for this elixir is grown on a family farm in northern Italy.

Traditionally, Yarrow was used for rheumatic complaints, muscle pain, and healing wounds. Research suggests that Yarrow can boost the immune response, which has a positive effect on overall health.

Research suggests Pine Buds may have anti-inflammatory effects and may stimulate the immune system. Mostly inflammation is caused by bacteria and fungi. Research has shown that pine oil from Pine cones has a suppressive effect on bacteria and fungi.

Honey contains more than 200 different types of constituents. It is full of vitamins and minerals, such as: vitamin C, D, E, iron, magnesium, potassium and sodium. All components that can help support the immune system.
Ingredients

Chaga mushrooms possess a wealth of important vitamins and minerals, which are: Vitamin B1, B2, B3, K and D2.

Besides that, this Chaga Health Elemental Elixir contains the following ingredients:

Chaga (Inonotus obliquus) (LINK TO BLOG) is one of the most powerful medicinal mushrooms. Chaga contains many polysaccharides/beta-D-glucans (LINK TO BLOG). Chaga also contains the following bioactive compounds:

Want to know more about the exquisite medicinal mushroom Chaga? Read it here, in our detailed blogpost! (LINK TO BLOG)!