Combine a 100-year-old family recipe from Estonia with fragrant, ripe, tasty, organic ingredients from the Scandinavian wilderness and you get the Immuno Elixir Chaga & Rosehip.

Supporting your immune system has never been so tasty. Try it yourself! 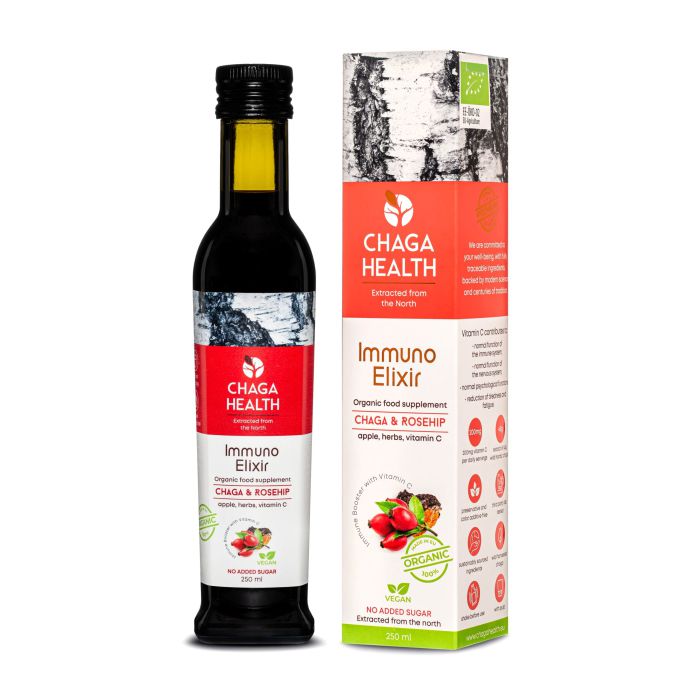 This 100-year-old Estonian family recipe came into the hands of Siim Kabrits, founder of Chaga Health and he knew one thing for sure: the world should benefit from this. And so it happened. Traditionally, this elixir was used to support the immune and defense system and it contains the following ingredients:

Chaga has been used for over 600 years in Asia, Russia, Estonia and Siberia for its potential health-promoting properties. Traditionally, a strong tea was made from Chaga mushrooms and they would simmer on the stove for hours before a dark, almost black liquid remained that was used as an antiseptic and anti-inflammatory.

Rosehip has very high levels of vitamin C: 300/4000 mg per 100 grams. This can offer a supportive effect on the immune system. Rosehip also has anti-inflammatory, antioxidant and antimicrobial properties.

Traditionally, Yarrow was used for rheumatic complaints, muscle pain, and healing wounds. Research suggests that Yarrow can boost the immune response, which has a positive effect on overall health.

Research suggests Pine Buds may have anti-inflammatory effects and may stimulate the immune system. Mostly inflammation is caused by bacteria and fungi. Research has shown that pine oil from Pine cones has a suppressive effect on bacteria and fungi.

Made from freshly harvested, organic apples grown in Estonia. You know what they say: "An apple a day, keeps the doctor away...".

Chaga mushrooms possess a wealth of important vitamins and minerals, which are: Vitamin B1, B2, B3, K and D2.

Besides that, this Chaga Health Immuno Elixir – Chaga and Rosehip contains the following ingredients:

Chaga (Inonotus obliquus) (LINK TO BLOG) is one of the most powerful medicinal mushrooms. Chaga contains many polysaccharides/beta-D-glucans (LINK TO BLOG). Chaga also contains the following bioactive compounds: