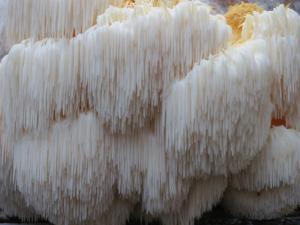 Is it a wig? Is it a Hungarian shepherd's dog? (Honestly, you should Google this one for fun….)

Its "waterfall" of creamy white strands is indeed reminiscent of a lion's lush mane. And with its potential to stimulate focus, concentration and support nerve cells, the lion's power of this mushroom is also evident.

A hairstyle many would envy. But what else does Lion's Mane have up its sleeve?

What is Lion's Mane?

Lion's Mane is considered a true delicacy especially in China and Japan. The 'flesh' of the mushroom has somewhat of the taste and texture of cooked lobster.

Lion's Mane is a parasitic fungus that grows on both living and dead deciduous trees. The mushroom is most attracted to beech trees, but is sometimes found on oaks or acacias.

Originally, Lion's Mane grew in North America, Europe and Asia. In Europe, however, is is becoming increasingly rare to find in the wild. For this reason, this mushroom has been placed on the red list of endangered mushroom species and may no longer be picked.

For the first usage of Lion's Mane, we have to travel back in time for at least 2,000 years. At that time, due to its culinary and medicinal properties, it was reserved only for the nobility in ancient Japan and China. Later on, the mushroom became more and more accessible to the rest of the population.

Lion's Mane was also very popular among Buddhist monks. They would drew a highly concentrated tea from it. They believed the supplement brought focus and concentration, which made it a very useful supplement for their meditation practice.

So besides being a popular food in Asian cuisine, Lion's Mane also possesses special health benefits:

Lion's Mane is a great source of antioxidants. Antioxidants help the body fight off damage that can be caused by free radicals. We can best explain this by using an example. If you cut an apple into pieces you will first find a fresh yellow-white core.

However, if you leave the apple unprotected and unrefrigerated on the counter for a few hours, you will notice that the apple has discolored to a less appetizing brown color. The driving force behind this process is called 'oxidation'. You can counteract this by sprinkling the apple with a little bit of lemon juice. Lemon juice is a source of antioxidants which can slow down the oxidation process.

Antioxidants can protect our body cells in a similar manner against the harmful influence of free radicals. (Cellular) aging can thereby be prevented and the immune system can be supported. If you want to learn more about antioxidants; in our blog about Chaga we will discuss this in more detail.

As we age, our brain functions decline. Many people in later life therefore have to deal with the well-known memory loss or they suffer from a lack of focus. This is caused by brain cells that have been damaged over the years or neurons (nerve cells) which have shrunk.

Several studies, especially animal studies, have been done on the effects of Lion's Mane and like the old Buddhist monks thought: Lion's Mane seems to stimulate our brain. For that reason, this mushroom is classified among the so-called 'nootropics'.

These are natural or synthetic substances that can contribute to the preservation of healthy brain functions. Scientists have discovered active components in Lion's Mane that stimulate the production of NGF and BDNF.

NGF also stimulates the production of new myelin sheaths. These are sheaths made of fatty tissue that layer around nerve cells in which they protect them. NGF also helps strengthen neural pathways in the brain.

Neural pathways for learning and for good memory

Here's an example of how the process of making new neural pathways works: You're listening to the radio and you're hearing a beautiful new song on the radio. You download the song on Spotify and put it on repeat. At one point you start to recognize the melody, and after a while you can sing the whole song along word by word!

This is the wonderful work of creating a new neural pathway, which gets stronger and stronger the more we learn. In this process, NGF plays an important role.

Scientific research suggests that BDNF may help to increase brain plasticity, keeping brain cells resilient in times of stress and during the aging process.

You know what they say: A green smoothie a day, keeps the doctor away! And especially with a shot of Lion's Mane, which can help boost your brain for a day full of productivity and focus.

Supplies:
Blender (or in case of emergency: hand blender + bowl)

Preparation:
Place all ingredients in the blender and mix! When the ingredients form a creamy mass, your 'brain boost' smoothie is ready. Enjoy!