Would you like to experience the power of the medicinal mushroom Chaga in its purest form? The Chaga Chunks from Chaga Health are just the thing for you.

Brew your own Chaga tea with the 100% organic Estonian Chaga Chunks. Chaga contains a high concentration of antioxidants, vitamins and minerals that can help strengthen your immune and defense system. Its taste is also delicious!

Get started and surprise yourself and others with this flavorful Chaga Chunk tea. 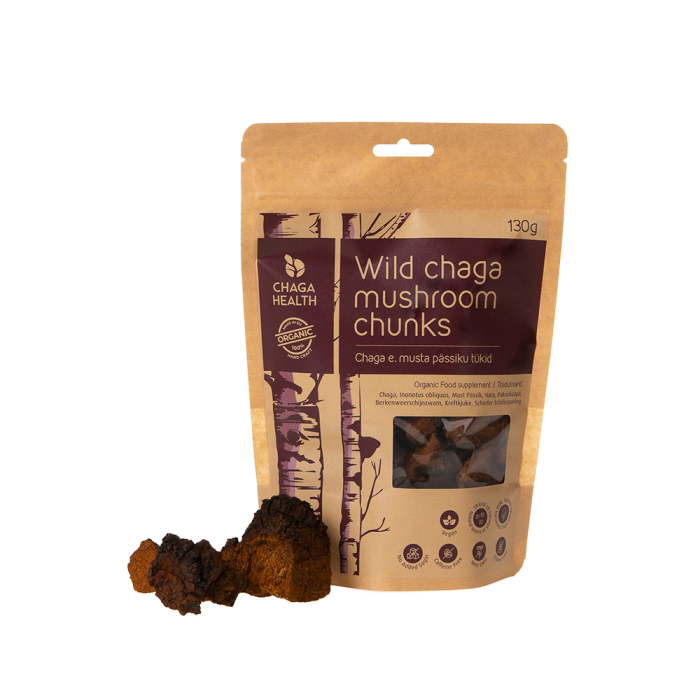 Traditionally use of Chaga

Chaga (Inonotus obliquus) is not just any mushroom. When you see Chaga, the first thought that most likely will come to mind is that you are looking at a burned piece of a wood. The Chaga "conk," as the visible part of this mushroom is called, has a charcoal-like appearance.

Generations before us have noticed, however, that when they cracked open a piece of Chaga, there was an orange/gold hidden core underneath: the real richness of Chaga. Due to its beneficial properties, it was nicknamed the "King of Mushrooms”.

For over 600 years, Chaga has been treasured in Russia, Estonia, Asia and Siberia for its potential beneficial effects. Traditionally, Chaga was added to boiling water, where it would simmer on the stove for hours until a dark, almost black colored liquid remained. This "tea" was then sipped as an antiseptic and anti-inflammatory.

The Chaga in this product comes from Estonia, which is where Chaga grows naturally and where generations of families have benefited from this wonderful mushroom for many years.

The Chaga Chunks can be reused up to 5 times

Chaga (Inonotus obliquus) (LINK TO BLOG) can count itself among one of the most powerful medicinal mushrooms. It contains many polysaccharides/beta-D-glucans (LINK TO BLOG). Besides that, Chaga contains the following bioactive compounds:

Betulinic acid is produced by birch trees and is found in birch bark. Since Chaga loves the birch tree and often uses it as a host, Chaga absorbs a lot of this betulinic acid. Betulinic acid is a source of antioxidants and is scientifically researched for its possible cancer-inhibiting effects.

Interested in learning more about the antioxidant powerhouse Chaga? Read our blog here (LINK TO BLOG)!